Bram Stoker's Dracula. Odd name for a game really - Dracula would have sufficed. I mean, it's not as if there's Mary Shelley's Dracula knocking around. Anyway, the Count has borrowed your fiancée, probably intending to commit bloody deeds at some point and your task, surprisingly enough, is to rescue her. And knock Dracula out for the count.

The vampire has many friends including henchmen and small, evil animals which suck the very lifeblood out of you. But worst of all, there's the Brids of Dracula. Gulp!

Set over nine stages, Bram's golden egg combines platform action with elements of the beat-em-up genre. The hero (that's you - if you buy the game) is called Jonathan and he's blessed with the sweetest two feet since Eric Cantona, a punch straighter than Lennox Lewis and a wardrobe nattier than George Armani's. Scattered around the dank castle halls are coffins to kick, cross to brandish and bottles of blood to sup.

Dracula basically involves a lot of wandering around, kicking small animals and dead folk in such exotic locations as taverns, convents, castles and asylums. Graphically, it looks OK but unfortunately it all gets rather dreary after a while.
"Dracula, you can keep my fiancée. I can't really be bothered". 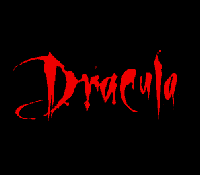 Sinister organ music fills the auditorium, and the single word 'Dracula' appears on the screen, daubed in blood. The audience sink lower into their seats, and one or two of them whimper in anticipation, gripping nervously onto their partners' arms as... 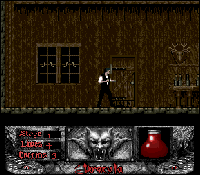 ...the music cuts out abruptly and a rather brown-looking room appears, with a man standing in it. A semi-literate introductory screen has informed us that this is The Tavern. 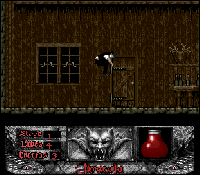 Perhaps sensing the danger ahead, Jonathan Harker (for it is he, presumably) puts his head between his knees, grasps his ankles with his hands, and, with an asthmatic gasp, leaps bodily into the air. He lands again and regains his slightly awkward stance, without a trace of embarrassment. 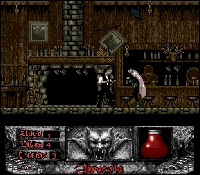 Jonathan then walks along a bit, past lots of brown scenery. Very little seems to be happening when - suddenly! - Jonathan finds himself face to face with what must surely be a vampire. 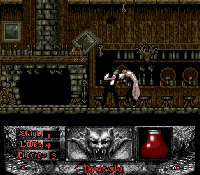 But - oh no! - despite being a professional vampire hunter, Jonathan appears to have come out sans garlic, crucifixes, stakes or holy water. Flailing desperately, he punches the vampire in the face a couple of times... 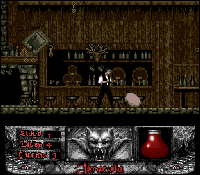 ...and the vampire mysteriously flops to the brown floor and vanishes. Phew. 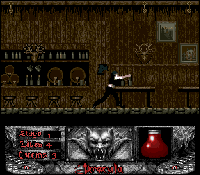 Yikes, a deadly killer bat (or a black plastic bin liner, or possibly just an oily smudge on the screen), coming straight to him. Thinking quickly, Jonathan punches the bat and, with an out-of-all-proportion 'crump', it falls to earth and disappears. 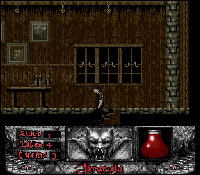 Jonathan walks along a bit. 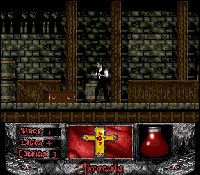 Ah ha! One of the vampire's coffins that need destroying. But how? By shining sunlight on it, through some fiendish light-and-mirrors puzle? By somehow dragging it towards running water? How? 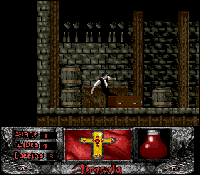 Actually, by kicking it a couple of times. 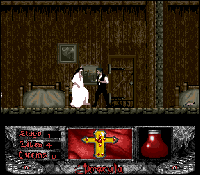 Later, with all Level 1's coffins out of the way, Jonathan encounters the end-of-level boss. He kills it by - No! Surely not! But it might just work - punching it a couple of times. 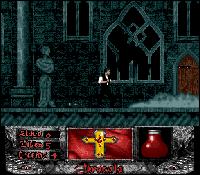 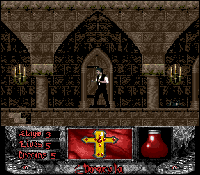 'what's through that door?' wonders Jonathan. But he never finds out, as lots of funny lines suddenly appear on the screen and he starts to twitch about spasmodically, refusing to respond to joystick commands. It doesn't matter, though, as the audience all appear to have either walked out or killed themselves.